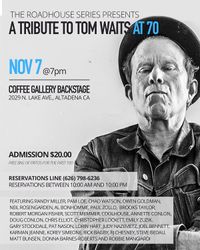 The Roadhouse Series Presents: A Tribute to Tom Waits at 70


On December 7th, 2019, L.A. based Singer-Songwriter Tom Waits turns 70 years old. The Roadhouse Series has decided to get an early start and in Tom Waits style stay late. To make an even bigger party, we've included a cast of Roadhouse thousands. The requests keep coming in from L.A. singer-songwriters who love Tom so much but we've finally printed up an official cast list although the show may go on for days! Be sure to ask Bob Stane about his days as owner of the Ice House in Pasadena when he auditioned and booked Tom Waits for his opening act for several shows.

Tom is an iconic figure in the singer-songwriter movement of the 70s who ran counter to the usual 'sensitive' artist so common to the times. Rather, Tom came on as if he'd stepped out of the pages of Jack Kerouac's On the Road. He is a little bit Dylan, a lot of Bukowski and mostly himself writing songs that have engrave themselves in the American consciousness through a legacy of albums, plays, films, and unforgettable stage performances. His albums from Closing Time & Heart of Saturday Night through Raindogs, Swordfishtrombones to the recent Bad as Me are inventive, wildly innovative and always engaging. He has maintained a career as a character actor appearing in films like Ironweed, Coffee & Cigarettes, and The Old Man and the Gun.

Journalist Karen Schoemer of Newsweek stated that "to the postboomer generation, he's more Dylan than Dylan. His melting-pot approach to Americana, his brilliant narratives and his hardiness against commercial trends have made him the ultimate icon for the alternative-minded."

We owe a special thanks to Frito Lay for their support of Tom's career. A free bag of Fritos for the first 100 customers.