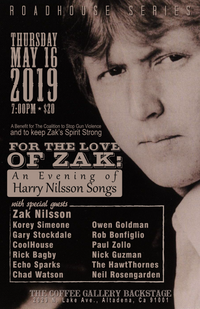 For the Love of Zak Nilsson - An Evening of Harry Nilsson Songs. A benefit for The Coalition to Stop Gun Violence and to keep Zak's spirit strong. )


I predict in the future when music historians are looking at the popular music of the second half of the 20th Century, singer-songwriter Harry Nilsson will emerge as one of the most gifted and important artists of the era. The Beatles were his fans long before they met him. His songs were versatile, humorous, bold, tragic and full of everyday insight. From his first release in 1966, he began a legacy of experimental pop-rock songwriting and recording that broke the mold of all that came before. Today his work reveals an artist full of imagination, creativity, willing to take leaps that were often risky with a collection of songs that still inspire and instruct today. In fact, I don’t believe popular music has caught up with Harry Nilsson yet.)

His best-known hits include Fred Neil’s “Everybody’s Talkin,” Badfinger’s “Without You,” and his own, “I Guess the Lord Must Be in New York City,” “One,” and “Coconut.”)

Now the Americana music community in Los Angeles will gather to show love and support for Harry’s oldest son, Zak, who has been diagnosed with cancer. He has been a great supporter of the L.A. music scene and The Roadhouse Series appearing in our tributes to John Lennon, George Harrison and The British Invasion. For this night, he will be performing as well.)

Zak has chosen for the proceeds to go to The Coalition to Stop Gun Violence. When Harry Nilsson’s close friend, John Lennon was brutally murdered in 1980, he joined in the legislative fight to create sensible gun safety laws. Zak is asking for this peaceful, positive and educational group to benefit from this concert in memory of John Lennon and his father, Harry Nilsson.)

This will be a night to celebrate life as we bring down music of the heavens with the help of the late-great Harry Nilsson and his son, Zak….and L.A.’s best musicians, singers and songwriters!)