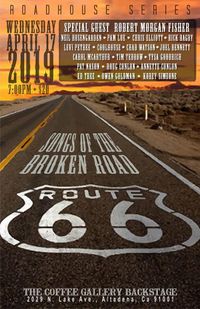 The Roadhouse Series Presents: Route 66-Songs of the Broken Road

The Roadhouse Series brings you a show devoted to the songs of Route 66 and the endless trails of American highways we have traveled for generations, The Songs of the Broken Road.

Songwriter and actor, Bobby Troup, wrote in his famous song, “Get your kicks on Route 66.” Over the last century Americans have found much more than kicks the route that carried them to their dreams. Steinbeck wrote about it in his classic The Grapes of Wrath. Woody Guthrie traveled it along with millions of other migrants, and troubadours have traveled its hard road in search of a new life. American highways have long been the place that have transported our dreams, desires and hopes. Route 66 is the greatest of them all.

The artists of the Roadhouse have hand-picked some of the best songs that capture the spirit of wander lustful adventure that has kept our country’s spirit alive. With a set list that includes songs by The Rolling Stones, Steve Earle, Emmylou Harris, The Doors, Roger Miller and Hank Williams, among many others, this promises to be a quintessential Roadhouse experience. Don’t miss it!